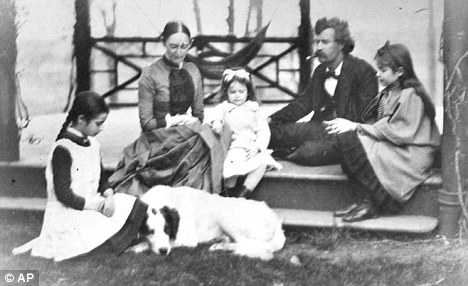 One of the inspirations for Finn’s journey around the Med in Letters to Strabo is Mark Twain’s first commercially successful novel: The Innocents Abroad. I use it with quotes to track Finn’s progress. It’s amusing and well-worth reading. But as I explored this connection further I discovered that the tragedies of Samuel Clemens’s (Twain’s) later life had meaning also for Finn’s own life-journey. The photo above of Samuel with his beloved wife Livy and his three daughters Susie, Clara and Jean (and their cute dog Hash) was taken in the last days of their childhood innocence. Clara on the left, whom he called ‘the sasmill’ because of her unruly spirit outlived Twain by 50 years and secured his reputation. Finn rediscovers her story in Zurich. Susie the eldest died young but the tale of her experiences at Bryn Mawr has an unexpected and disturbing effect on Eve’s friend Eve when they visit Twain’s house in Hartford. And Jean, the brave animal-lover who struggled with epilepsy is an inspiration to him and Eve for her sheer determination and love of life.

4 thoughts on “Letters to Strabo — The Innocents Abroad”