The Pre-Raphaelite murals in the old Library at the Oxford Union were painted between 1857 and 1859 by a team of young artists including Dante Gabriel Rossetti, William Morris and Edward Burne-Jones.  The paintings depict scenes from the Arthurian legends. My own novel Love in Lindfield incorporates the painting of the murals in a scene where Burne-Jones wife, Georgina, relates how she first met Charles Eamer Kempe at Oxford:

“You asked if I had any recollections of Mr Kempe. Well I certainly do but it was quite a long time ago. The first time I met Mr Kempe was nearly fifty years ago in 1857, about the time he went up to Pembroke. He was a very handsome young man, artistically inclined although he’d gone up to study for the ministry. He was a few years older than me. Ned and Topsy had introduced him to me one day while they were painting murals at the Oxford Union and we dined together that evening.

“When we were introduced, I remember he immediately made a very good impression on me – he was both serious and shy; but as I later learned, had an ever-curious manner and an amusing and avuncular humour. I remember him telling me over dinner that his chosen course had been to go into the Church. It was his first love, he said. Indeed his only ambition had been to follow the ministry of Christ. But he’d found that his speech problems were a great impediment, preventing him from easily preaching in public. Fortunately, at Oxford he’d come across a whole series of new influences. An alternative course of action had begun to open up to him. Inspired by Ruskin’s ‘Seven Lamps’, he’d started a detailed study of local ecclesiastical architecture.”

Unfortunately the painting of the murals had proved to be a bit of a disaster. As the letter goes on to explain: “Ruskin and Rossetti had organised the whole project. But unfortunately there’d been a forced pause in the proceedings while unexpected technical issues were resolved, so they’d temporarily returned to London.” In fact, the attempt by the painters to paint onto freshly applied distemper had resulted in the images fading as they were exposed to light from the upper windows of the library.

“The need to work in distemper at height between large whitewashed windows meant that the chalk and size-tempered paint was already fading. They’d originally planned to have the job finished by the end of the Long Vacation, but it was October and still the murals were nowhere near done.

But after a while I could tell that he was ill at ease. We were standing next to Topsy’s nearly finished mural: ‘How Sir Palomydes Loved La Belle Iseult’. He looked somewhat disturbed by it, but pretended politely to admire the brushwork.

‘It’s most remarkable in form,’ Kempe volunteered. Topsy frowned and Ned laughed. I could tell Topsy was annoyed.

‘I believe it has some merits as to colour, young man, but I must confess I should feel much more comfortable if it had disappeared from the wall as I’m conscious of it being extremely ludicrous in many ways,’ Topsy whispered between his teeth. He turned to look at Rossetti who was inspecting his own less complete work, ‘Sir Launcelot’s Vision of the Sanc Grael’, on the other side of the room.

‘How are you pleased with it, Gabriel?’ he shouted. 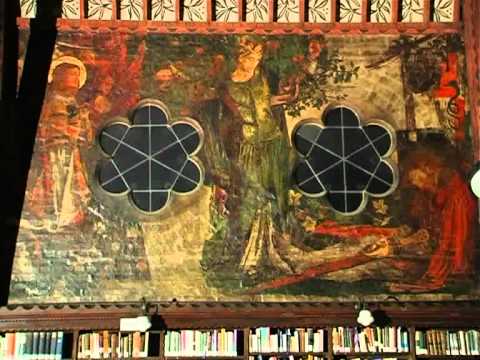 ‘It’s beginning to be unintelligible,’ Rossetti replied, cursing. Indeed, the glare of the sunlight from a gap in the whitewashed windows made the detail almost impossible to see. Only the radiance of its variegated tints gave any great impression of its rendering. You could just discern the face of his new muse, painted in the form of Guinevere standing amongst the branches of an apple tree. She was staring down at the sleeping Launcelot with the Holy Grail by his side. There was no mistaking her dark, crinkly hair, her slightly tilted nose, enormous dark eyes and sublimely long neck.

This woman of course was the famous Jane, who later became Morris’s wife. The paintings were repainted and survive today.

Jane Burden was born in Oxford, the daughter of a stableman. Her mother Ann was illiterate and probably came to Oxford as a domestic servant. Little is known of Jane Burden’s childhood, but it was poor and deprived.

In October 1857, Burden and her sister Elizabeth, known as “Bessie”, attended a performance of the Drury Lane Theatre Company in Oxford. Jane Burden was noticed by Dante Gabriel Rossetti and Edward Burne-Jones. Struck by her beauty, they asked her to model for them. Burden sat mostly for Rossetti as a model for Queen Guinevere and afterwards for William Morris. During this period, Morris fell in love with Burden and they became engaged, though by her own admission she was not in love with Morris.

She remains one of the deepest inspirations for the pre-Raphaelite movement.